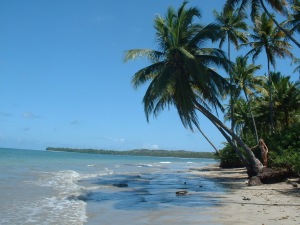 I’ve decided that that I’d like to invite Robinson Crusoe to my fantasy dinner, so that we can chat palm trees and Ray Mears techniques.

I would also like to get Christian Bale along and maybe Stalin as a youngster because I have an old-fashioned, secret and guilty crush on him (I’m sure it’s wrong, I know, but check him out), which I’d very much like to get to the bottom of. Bale is more than welcome for his audacious smugness/misplaced self-deprecation alone: “I would like to say acting is a difficult job, but it’s actually damn easy and pretty pointless”. Although, equally worrying and ever so slightly obsessively, he has a rather large amount of brownie points in credit with me at the moment and therefore Can Do No Wrong. Other guests I am swilling around in the chipped-toothed imperfection of my gathering are Bob Dylan (predictable, but great), Mad King Ludwig (as long as he doesn’t scare me), JG Ballard and Alexandre Dumas (who I always maintain is an ancestor) as well as the Godmother from the book Marigold’s Godmother who has happily scarred my mind more than any other fictional character, ever.

I have also decided that this blog will be going through a NOTES AS FAR FROM THE NEWSROOM AS POSSIBLE hiatus. It may just turn out to be a brief stage or a fleeting sojourn or it may develop into an all-out era, just as long as it is inspired by my honourable dinner guests.

This entry was posted in Uncategorized. Bookmark the permalink.